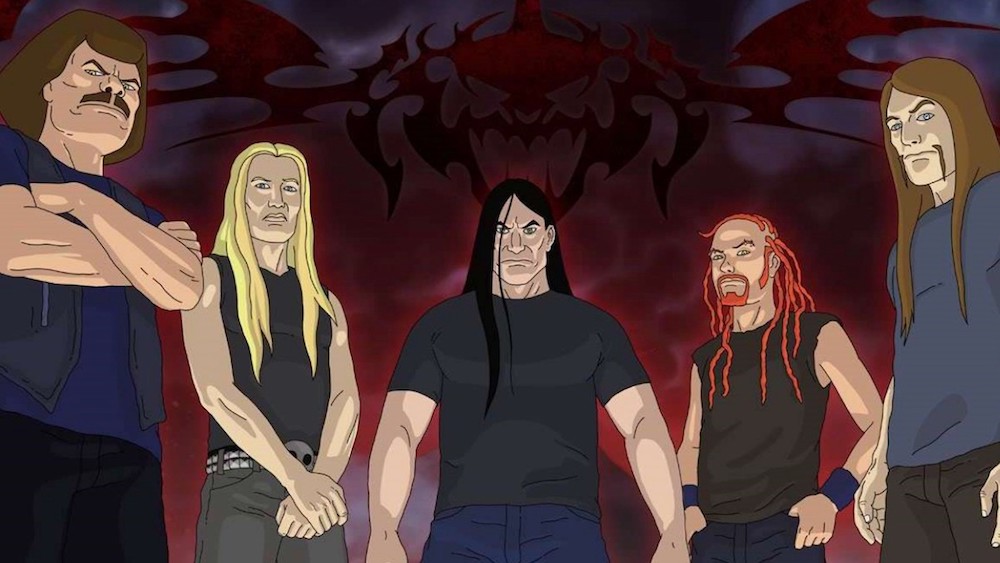 Everyone’s favorite cartoon band made flesh, Dethklok, performed last night at the Fillmore Philadelphia to conclude Adult Swim Festival. Unfortunately, the event did not yield a new trailer for the upcoming Metalocalypse movie, but it’s coming.

“I can tell you… what has already been released, which is that we are making a feature Metalocalypse movie, and that’s what we’re in production on right now. So we’re right in the middle of making the movie, so all the questions that were still lingering after ‘The Doomstar Requiem’ — a one-hour long rock opera special — are being answered… I don’t wanna say too much about it, but it’s a very big project. We’re all excited to be knee deep in it right now.”

When asked about the release date, he had no new information to offer:

“That will be up to [Adult Swim] to discern. I just know that I’ve still got work to do.”

Small’s studio in Los Angeles was robbed last week, with the thieves taking a number of the musician’s guitars.

Here’s the official plot summary for the upcoming Metalocalypse movie.

“The power-hungry Tribunal unveils their secret and deadly ‘Falconback Project’ as the world grows in embattled chaos and the menacing Doomstar breaches the Earth’s atmosphere while the mysterious and twisted dissent of a band member threatens the future of Dethklok. Picking up directly after the heroic rescue of Toki Wartooth: Can Dethklok choose between their egos and the greater good of the world to embark on a gauntlet of dangers that will try their very souls and finally write the song that will be their salvation?”

The last time that Dethklok performed live was in November 2019, at a different Adult Swim festival, and it was their first show in five years. If you weren’t in Philadelphia last night, check out the footage below—hopefully it won’t be another three years until the next gig.

Update: Adult Swim shared some pro-shot footage of the show. Watch it below.

Dethklok concert was fucking insane. My entire body hurts but that’s how you know it was fun. No movie trailer but they acknowledged it and that’s good enough for me pic.twitter.com/GmgjFpInMg— Cybernetic_Cephalopod (@cyberceph) August 8, 2022